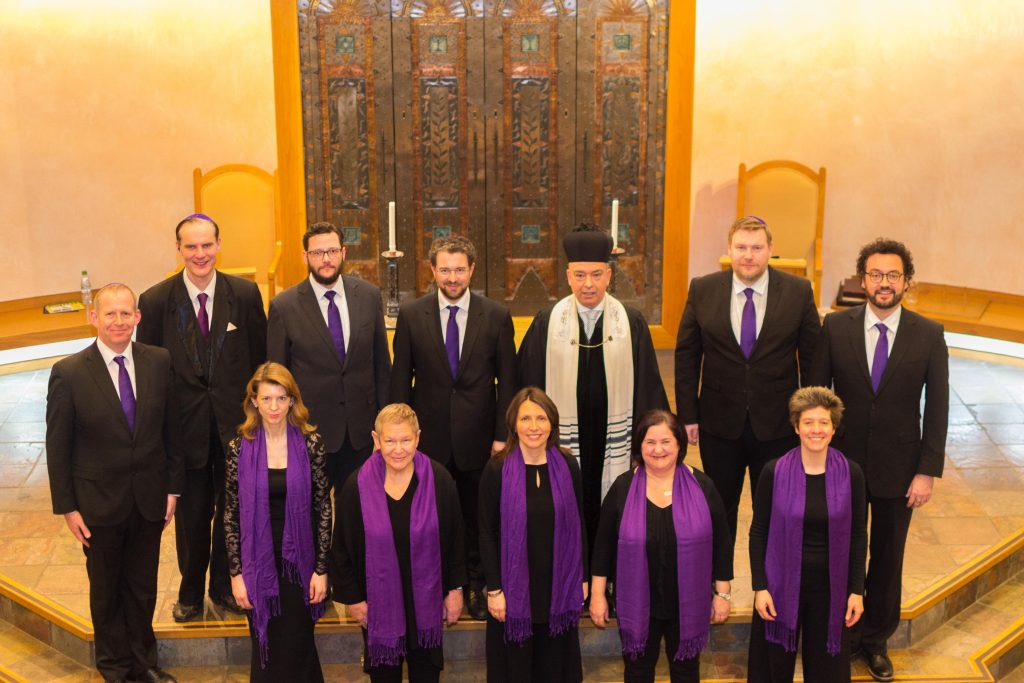 The Professional Choir is conducted by Benjamin Wolf and sings at Friday night services, most Shabbat morning services and festivals. It includes both Jewish and non-Jewish members, some of whom have sung for the synagogue for several decades. In recent years the choir has recorded an anniversary CD and performed for documentaries broadcast on BBC radio and television. Its members lead busy lives outside the synagogue, in some cases as professional conductors and singers.

Henry Kuttner z”l, whose father was a founder member and who was a dedicated member of our music team, told its story:

“It was early 1939 and Jewish Refugees were concentrated in the Swiss Cottage/Finchley Road area. A few got together to form the nucleus of a Community and with the help of the Hon. Lily Montagu and St. John’s Wood Liberal Jewish Synagogue we were able to hold our first Friday evening Service in the Montefiore Hall on Friday 24 March 1939.

In the weeks preceding this Service, Oberkantor Magnus Davidsohn, who became our first Chazan (Cantor), managed to gather together a group of professional singers – mostly famous stars of Opera from Berlin and Vienna, all of whom sang for no fee. Magnus Davidsohn had sung with them all on the continent. He also ‘found’ for us the brilliant musician Melitta Heim (a retired opera singer) who accompanied us on the organ until 1950. She was followed by Paul Lichtenstern and later on by David Lawrence, both of whom brought a wealth of talent and knowledge to their playing. Since then we have had a series of exceptional organists. The scores from which we sang had been miraculously saved from the burning Synagogue at Fasanenstrasse on Kristallnacht by Magnus Davidsohn who brought them here.

The sound produced by the 1939 choir was outstanding and a hard act to follow but over the 70 years since then we have continued to be privileged with a choir of very high standard, led by ten choirmasters.

Though the choir’s repertoire has been based on the 19th Century music of Salomon Sulzer and Louis Lewandowski, every Cantor in his turn has introduced other music to us which has gradually increased our musical options.

It would be impossible to name all the singers who have sung with us over the years, but the following certainly deserve a mention: Mrs. Alexander, (a breathtaking alto), Franzi Goodman, Mrs. Rosenthal, Hanni Lichtenstern and Sue Heimann (the latter two with stunning soprano voices), Dr. Hans Kuttner, Eric Goodman, Mr. Glaser, Ernst Frank, Walter French and Juanita Wise.

One of the most satisfying aspects of the choir over the years has been the intense loyalty shown by several non-Jewish singers who fell in love with our music and stayed.

We have been blessed indeed with such loyalty and may I say my own thanks to them here.”