Alyth Belsize Football Club is one of London’s leading Jewish junior football clubs and is attached to Belsize Square and Alyth Gardens (North Western Reform) Synagogues. Our ethos, as one of few community-based clubs, recognises that for many people the football is not an end in itself but a means to an end.

Ultimately, while we fully support an effort to promote excellence, we are working towards building community identification amongst the kids and promoting Jewish values. Our approach is inclusive rather than selective and we have a programme which enables both individual and group development.

In 2011-12 the club had seven teams playing in the Maccabi, West Herts and Excel leagues, with over 150 members from ages 6 upwards. Our U9 team in particular had a fantastic season winning both the league and the cup! This season we are fielding teams from U7 to U11 in the Maccabi league and one U13 team in the Excel league.

Matches take place on Sunday afternoons, generally played on the all-weather pitches at the Barnet FC training ground in Edgware, and the season runs from September to May. Teams play most weeks with short breaks over school half-terms and holidays.

Training sessions with professional coaches are also held for all age groups both during term times and ‘pre-season’ over the summer.

To organise this takes a team of adult volunteers, and we rely on general parental co-operation and support to make everything work smoothly.

You can follow the club’s progress in the sports pages of the Jewish press. Results, league tables and match reviews are published on www.totallyjewish.com. 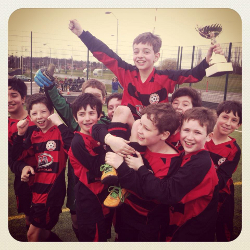