Chanukah and the battle against evil: then and now

Certain events in history are watershed occurrences. Some have moved us forward, some weigh heavily on the souls and fibre of civilisation. The horrific Paris terrorist attack by ISIS, or ISIL, is one such tipping point.

Suddenly there are declarations of World War III, a security crisis and the massive human problem of dealing with hundreds of thousands of Syrian refugees. Our eyes have been opened to the necessity of waging war against radical extreme Islam.

ISIS now controls a territory larger than Britain, has recruited at least 60,000 militants and thrives in the heart of Iraq and Syria. It is bent on re-establishing the Sunni caliphate and destroying the “heathen” West. And now it threatens our nations, cities and way of life.

Well, it is Chanukah. The holiday begins on the evening of Sunday 6 December, when we light the Chanukiah, sing, eat latkes and doughnuts and retell the story of the Maccabees’ brave stand for freedom against the Greek Seleucid monarch, Antiochus IV Epiphanes, who reigned from 175 to 164 BCE.

The pre-eminent lesson of Chanukah is that in order to retain our values and live as Jews, freely practising our religion, we have to fight for the right simply to exist.

The war of the Maccabees was an existential fight, not so much for numbers, though scores of thousands died, but for the preservation of our Jewish soul, our right to live as Jews.

After being prevented in 168BCE by the superpower, Rome, from pursuing his dream of conquering Egypt, Antiochus returned to his Syrian realm to find that his Jewish subjects had reacted to a false report of his death in Egypt by ousting his choice of High Priest and reinstating the previous holder.
He vented his fury and frustration on Jerusalem’s Jews. Some 40,000 men were executed, around the same number of women and children sold into slavery, and their homes demolished.

He then turned on Judaism itself, banning Torah study and circumcision as well as converting the Temple to the worship of Zeus, with a daily sacrifice of a pig – he had already stolen the Temple’s golden treasures.

We learn from this heroic episode of Jewish resistance that evil exists, that our people have had to fight against those bent on destroying us.

Earlier this year, archaeologists discovered under a parking lot in Jerusalem the remains of the “acra” fortress built by Antiochus between Ir David, the City of David, and Har Habayit, the Temple Mount, on the site of demolished Jewish homes. It is all there, an archaeological miracle: the barracks, the watch towers, the spying on all Jewish activity – symbols of despotism and brutality.

In Israel Chanukah will be celebrated in grand style as Jewish history seen from the Israeli view, reminding us of Israel’s past and ongoing fight against forces bent on its destruction not just as a sovereign state but increasingly for the right of Jews to be Jewish.

Alarming claims from Mahmoud Abbas and the Palestinian Authority that the Kotel, the Western Wall, the last remnant of the Second Temple, is an “Islamic shrine”, is the clearest denial of Jewish ties to Jerusalem, both historically and religiously.

The western world has been increasingly shocked by ISIS brutality. Its origins lie in the Muslim Brotherhood, founded in Egypt in 1928. Sadat’s assassination in 1981 was carried out by a member of a Brotherhood offshoot. The 1979 Iranian theocratic revolution supported Hamas, another Brotherhood offshoot, in Gaza, as well as the Hezbollah militia in Lebanon. All these factors have crippled the last remnants of “secularism”. Yes, even the brutal dictatorships of Nasser, Assad, Saddam Hussein and others are looking less threatening than ISIS madness.

The Jewish people, with our experience of fighting terror and evil around Israel, can play a crucial role in giving others strength and hope against pure evil.

God bless our people, Israel, our families, our loved ones, and the vast majority of Christians, Jews and Muslims who desire not war, not terror, but peace.

This entry was posted in Rabbi's Message on November 30, 2015 by Hilary Curtis.

How Our Congregation gets recorded

Each month four BSS members gather in a small recording studio at the KC Shasha Centre for Talking News and Books in Golders Green to produce an audio version of Our Congregation.
It takes our speakers about an hour to read the publication. Their work is recorded by experienced sound engineer, Adam Bradley, and the finished product (USB flashdrive or CD) is posted to our listeners.

Who are our listeners? Basically, they are our visually impaired members but there are also others who share a link with our community. One avid listener comments: “Klopstick brings back such
memories of my parents.” Another adds: “The first time I listened to Klopstick, it made me cry because his voice was so like my Tante’s husband.”

The recording experience is also valued by our members who volunteer as the voices of what is familiarly known as Our Cong. Antony Godfrey finds it a “privilege to read the incisive and wise words of Fritz Klopstick.” Jackie Alexander enjoys using her voice that she has often been told “sounds like a Weather Girl on the radio”. We have also recently introduced our listeners to new voices as we train members as readers. The range of voices has delighted our audience. 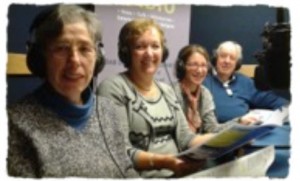 This entry was posted in Our congregation on November 30, 2015 by Hilary Curtis.

The right sort of fear: our High Holydays theme

Shalom Chaverim
As the days become shorter, we settle back into our routines. The test now is to infuse into our daily lives a spiritual and moral dimension. So here is a brief summary of the journey we made in our sermons during the High Holydays.

Erev Rosh Hashanah
I welcomed 5776 by introducing the theme of fear, because these are the Yamim Noraim, the Days of Fear (or Awe) when we confront our basic fears. But this should be put into perspective. While we have legitimate fears about health, finances, children or politics, when compared to earlier generations we are far better off in life span, health and security. We have the State of Israel and no longer need fear the pogroms and genocide endured by our grandparents and great-grandparents.

First Day Rosh Hashanah
On Rosh Hashanah, I expanded on our legitimate fears – including dentists and heights! – and looked at how our ancestors reacted. They were guided by a biblical fear, the fear of God (yir’at shamayim – the fear of heaven) the fear of doing the wrong thing. My examples were the midwives in Exodus, Shiphrah and Puah, who defied Pharaoh’s orders at risk of death because of yir’at Elohim, fear of God, and then the command in Leviticus not to “put a stumbling block in front of the blind nor curse the deaf … because you shall fear God”. No fear of thunderbolts here, just an awareness of doing the right thing.

Second Day Rosh Hashanah
Here I spoke about parents’ fears for their children’s future. This is the era of the “selfie”, of incredible narcissism, cynicism and a jaded attitude towards goodness. We need to ensure that our children do not forget their Jewish heritage and values or lose hope in the vital belief that they can make a difference through fulfilling the mitzvot.

Kol Nidrei
With antisemitism rising, another fear is a repeat of the Shoah. What lessons can we learn? My hypothesis is that, by dwelling on the means – the depraved torture, terror and murder of six million – we are in danger of forgetting the most important issue, the end. The aim was to annihilate Judaism as well as the Jews. On Kol Nidrei, the holiest night of the Jewish year, we must increase our support for the synagogue and what it represents. Especially in this congregation, we must be more determined than ever to make living Judaism our greatest priority.

Yom Kippur
Here I suggested we have two sides, as shown in the creation stories of Genesis chapters 1 and 2. I was once asked at a Bar Mitzvah whether I really believed that the kind of ethics I had taught mattered because, as the guest said, “That’s not my world, Rabbi. My world is about success and achieving”.
In Genesis 1 we are told to “conquer the world”, using our powers to conquer space, disease, etc. In Genesis 2, we are told we are nefesh, soul, and must be joined to another soul to develop and nurture our love for others. Genesis 1 symbolises our power. Genesis 2 is Shabbat, a reflection of the part of us that lives for others. I asked you to be a part of “my world”. We are more than figures and achievements, we are also love and soul.

Yizkor
I addressed our concerns as to how to keep our loved ones alive in our minds. To keep their memory fresh by recalling their values and beliefs. Through living by their principles, we continue to be with them. And if we live in such a way, with love and devotion, our children and grandchildren will in turn remember us.

Neilah
I ended by reviewing our journey of fear. Despite terror, economic uncertainty or worry about our loved ones, we need to confront fear in the right spirit – with renewed hope, strength, faith, love of humanity and love of God. We become the “god” we worship. If we are cynical and negative about our power for good, that is the god we create. The God with whom our ancestors communicated is an optimistic God, believing in the power to make the world better, rather than dimming our vision and reducing our faith, confining us in a world of negativity. Have hope, courage and faith before the gates close!

Thanks
There are so many people to thank for our High Holyday experience but I do thank all our daveners, Torah readers, Haftarah chanters, shofar blowers, the leaders of our Youth Services, the children who led Yom Kippur Minchah, our Succah decorators, the professional and community choirs, our caretakers, crèche workers, security, youth leaders, sound equipment people, wardens, webcasting crew, our music director Ben Wolf and Cantor Paul Heller.
Join us each Shabbat and send a wish and prayer for your dear ones. A special prayer for peace for the people and State of Israel. You are constantly in our prayers and thoughts.

This entry was posted in Rabbi's Message on November 1, 2015 by admin.